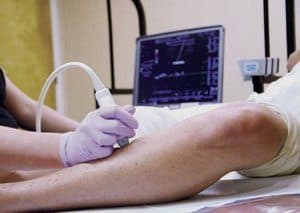 Only women get unsightly ropy, bulging varicose veins on their legs, right? Think again. Granted, it’s true that women do experience vein problems more frequently than their male counterparts.  By some estimates around 90% of varicose vein patients are female with varicose vein men making up the remainder.

So do men get off easy when it comes to varicose veins? Not really. On average, males have larger leg veins than females. This means that what men lack in frequency they more than make up for in severity.

Fortunately, there are minimally invasive solutions which have proven extremely effective on males and females alike. So if you’re less than thrilled with how your legs look (and feel) then read on.

You have see the ads and heard about the treatment options in women but do varicose veins affect men as well? The answer is yes they do. Varicose veins can occur to nearly anyone, this includes men too. Believe it or not, different studies have reported opposing results regarding the prevalence of varicose veins in men as compared to women.

In 1988, the Framington Study looked at 3,822 adults and found that more women suffer from vein disease than men. On the other hand, some studies indicate that men are more likely to suffer from varicose veins than women.

Back in 2003, the University of Edinburgh in the United Kingdom released a report. The researchers had followed 1566 subjects (699 men and 867 women) aged 18 to 64 to determine the lifestyle factors that can contribute to the development of varicose veins. While the study did not find a significant relationship between different lifestyles and an increased risk of having varicose veins, it did expose a very interesting fact. When adjusted for age, it found that 39.7% of males deal with varicose veins, as opposed to 32.2% of women. The 2003 study casts doubt as to whether varicose veins occur predominantly in women.

The truth seems to be that studies have found different numbers  over the years, they are not that dissimilar. Anyway you slice it, the prevalence of varicose veins in men versus women are very close. The big takeaway is this: men suffer from varicose veins too.

You’re in good company, in fact. Over 5 million American males currently have varicose veins which are severe enough to warrant treatment. The same factors put both genders at risk, including standing for long periods and high-impact activities like running. A genetic predisposition is also thought to play a large role.

2. For many men vein problems are more than just unsightly.

Varicose veins and the underlying vein disease which causes them can be uncomfortable or even painful. What’s more, in rare instances they can be dangerous.

All large veins have one-way valves which are supposed to keep blood flowing in the right direction—towards the heart. When these veins become stretched out or otherwise damaged blood begins to trickle back down the legs. This directly causes the formation of varicose veins. Note that this process also causes the legs to feel achy, heavy, and to visibly swell. 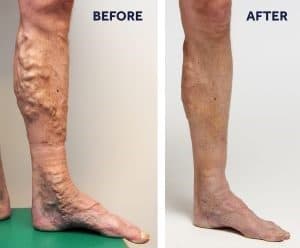 Unchecked vein disease, in very severe cases, can also pose a health risk. Over time, the excess fluid which collects in the feet and ankles can cause the skin to break down. This may lead to painful ulcers which won’t heal on their own without professional wound care. This type of ulcer can easily become infected as well.

It’s also possible for blood clots to form in diseased leg veins. When this occurs it’s known as a Deep Vein Thrombosis (DVT). In extremely rare cases these clots can break away and become lodged elsewhere in the venous system. When this happens in the lungs it’s known as a Pulmonary Embolism (PE). This is a potentially life threatening condition which requires emergency attention.

Non-healing or poorly healing ankle ulcers are an uncommon yet severe complication of moderate-to-severe varicose veins. This unfortunate condition can persist for months or even years, and often requires high-level treatment at wound care centers. Until recently traditional treatment, or lack thereof, has consisted of various forms of compression therapy. In many cases this approach provides only modest improvement while doing nothing to treat the underlying condition.

The cause of nearly all such ulcers is venous reflux, also known as venous insufficiency. As the large veins in the legs begin to fail, blood begins to trickle back down the leg. Not surprisingly, this leads to a dramatic increase in pressure. Over time this pressure restricts blood flow to the lower leg, especially around the ankles. In severe cases, this causes tissue in the region to die, eventually resulting in venous ulcers.

Fortunately, recent research has shown that early treatment of venous reflux can drastically reduce the time it takes an ulcer to heal. While this finding was expected, a recent high-quality, randomized, peer reviewed study published in the New England Journal of Medicine has offered convincing proof.

This study, “A Randomized Trial of Early Endovenous Ablation in Venous Ulceration” was published in May 2018 and is the largest study of its kind to date. The study’s findings show that early treatment with Radiofrequency (RF) Ablation, when combined with compression therapy, offers far superior results than compression therapy alone.

4. Why early intervention is important. 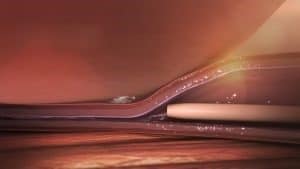 The early intervention study referenced above took place in 20 privately owned vein clinics in Great Britain. A total of 475 patients with active leg ulcers caused by chronic venous reflux were randomly put into one of two groups. The first received compression therapy coupled with venous ablation. The second received only compression therapy.

During the study, RF ablation was used to treat the reflux in approximately 2/3 of the ulcer patients. The remaining 1/3 received an injection based treatment known as ultrasound-guided foam sclerotherapy. Both treatment modalities have well-established success rates of approximately 96%.

Following treatment, each group was instructed to continue with at-home compression therapy along with any other recommended care. The patients were then asked to return for monthly follow-up appointments for the next year. During these follow-ups, the diameter of each patient’s ulcers were measured in centimeters. This measurement was then compared to the previous month’s measurement. By means of this simple yet effective tracking strategy the healing rate of each ulcer could be compared to the rest of the ulcers in study.

Several simple lifestyle changes may help manage your symptoms and possibly halt the progression of vein disease. They will not, however, reverse the process.

Compression stockings are perhaps the most widely known conservative treatment for varicose veins and achy legs. Periodically elevating the legs above heart level, e.g. “putting your legs up,” can also help. Over the counter Non-Steroidal Anti Inflammatory Drugs (NSAIDs) such as Motrin and Aleve may provide relief as well. 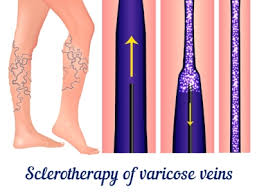 As alluded to above vein disease is an ongoing process which won’t get better on its own. Fortunately, two treatment methods are in wide use today which not only relieve symptoms but halt the disease process permanently.

The first is known as an ambulatory micro-phlebectomy. This involves the surgical removal of thick, ropey surface veins. It’s a simple one-hour procedure that can be done right in your doctor’s office using only local anesthetics. Once the vein is gone it’s gone for good—it’s been physically removed and can’t grow back. 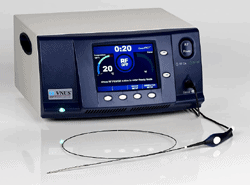 The second is known as Radiofrequency Ablation, often referred to simply as “RF.” This treatment uses specialized catheters to collapse unwanted veins. Once this is accomplished the vein in question is naturally absorbed back into the body. After about two months it’s as if it were never there.

Interested? If you’re ready to take action there’s a good chance that one of the above procedures can help. They’re both permanent solutions, and if you’ve got physical symptoms then it’s likely your insurance will cover the cost. Take the first step and call the Advanced Vein Center in Cranberry, PA at (724) 987-3220 today to discuss your options.

Why are varicose veins almost always found on the legs?

Why not on the arms, chest, or even the neck and face? Or for that matter why do many people with varicose veins also develop physical symptoms such as swollen, achy legs? For starters, the veins in the legs are generally larger than those elsewhere in the body. The underlying issue, however, is gravity. Ultimately, the reason why you’re much more likely to develop thick, bulging varicose veins on your legs is a matter of physics.

Functions of arteries and veins

First let’s talk about the different functions of arteries and veins. It all starts with the heart. At the risk of stating the obvious, the heart pumps oxygen-rich blood to all of the parts in your body. When blood enters the heart it’s then squeezed out, under considerable pressure, into arteries. All that’s needed to keep blood flowing in the right direction, away from the heart, is the pressure produced by its pumping motion. Gravity, or any other outside force, has very little to do with it.

Now for veins. In many ways they’re the opposite of arteries in both form and function. The body’s arteries have thick, tough walls which can handle the high-pressure blood coming from the heart.

The walls of veins aren’t nearly as thick, and they don’t need to be. The purpose of veins is to conduct oxygen-poor blood back towards the heart. Unlike the arterial system, the blood in the body’s veins operate under very low pressure.

The force generated by the pumping motion of the heart is just about spent when the blood reaches the venous system. This begs a very important question. We’ve established how arterial blood is pumped away from the heart. How, then, does venous blood make it back to the heart?To keep blood flowing in the right direction your veins rely on a system of one-way valves.

Preparing for your Procedure

Time will be set aside to discuss your medical history and complete a physical exam. At this time, we will go over all of the details with you to insure that you have a positive outcome. You will receive paperwork at the end of your consultation.

There are a few precautions you should take before coming into the office for laser treatment.

The vast majority of procedures used to treat spider veins are quick and painless, however, they may not be a perfect, permanent fix.

It is not uncommon for patients to notice areas of discoloration after sclerotherapy or laser treatment. It is important you understand it will get worse before it looks better. Using compression stockings will go along way in promoting the healing process. Depending on the extent of the work that was done and the severity of the resulting bruising, you may consider wearing compression garments for between two weeks and three months. There are also a number of helpful topical ointments like Melaquin or Scleroquin which you can find online.

Whether your spider veins are treated by laser/light therapy or with sclerotherapy, once the vein is closed off, a small quantity of blood will be trapped inside of the vein. This will initially lead to a darker appearance. Additionally, you may notice a lump or hard area until it is completely reabsorbed. This process usually takes between 6-8 weeks. If you notice that your vein isn’t becoming lighter as time progresses, you would be wise to schedule a follow-up appointment.